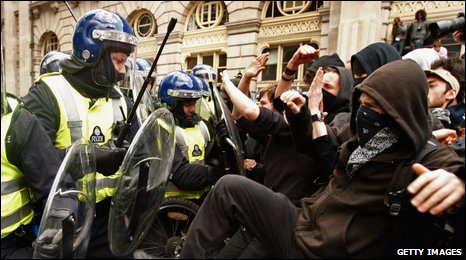 The police have extensive legislative and common law powers to regulate demonstrative assemblies and processions in English law.
It is through this prism, and a series of significant judicial rulings, that an attempt will be made to evaluate the degree to which English law achieves the correct balance between the affirmative rights in Articles 10(1) and 11(1), the general public interest and the qualifications defined in Articles 10(2) and 11(2) which indicate the circumstances in which the rights of protestors may be legitimately restricted, namely that such restrictions must be prescribed by law and necessary in a democratic society for the series of purposes specified in Article 11(2).
Elliott and Thomas highlight that Article 11 of the European Convention on Human Rights may be viewed as an extension of Article 10, as: ‘facilitating effective forms of public protest…provides a practical means’ by which freedom of expression can be collectively demonstrated and more widely disseminated to the larger community. Lord Bingham in the ‘The Rule of Law’, regards Article 11 as the ‘corollary’ of Articles 8, 9 and 10: ‘we have freedom to be ourselves, to think what we like, to say what we like: we can associate with anyone willing to associate with us’

This is of greater significance since the Human Rights Act 1998 incorporated Convention rights into domestic law, and with them the duty of both the police and the courts as public authorities to act compatibly with the Convention in the exercise of their duties, and which enshrined in English law for the first time a positive obligation on the State to facilitate Convention articles , the traditional Diceyan approach being a negative liberty to do anything not proscribed by law.
The Public Order Act 1984 (POA) enshrined in statute a series of public order offences previously covered by the common law including in Sections 1-3 riot, violent disorder and affray and under Sections 12 and 14, powers to regulate moving ‘processions and static ‘assemblies’ that the police believe may result in serious disorder.
Police powers under the POA 1986 include the requirements for advance notice of demonstrations if reasonably practicable and powers to direct the route of processions, if they believe such processions will result in serious public disorder, serious damage to property , serious disruption to the life of the community, or that the organisers have a purpose of intimidation. In exigent circumstances, a ban can be obtained if the senior police officer believes that the powers to impose conditions under s.12 will be insufficient to prevent serious public disorder, an imposition that requires the consent of the Home Secretary although significantly, the power to proscribe a procession is subject to judicial review under Section 31 of the Senior Courts Act 1981 and Part 54 of the Civil Procedure Rules 1998.

In addition, s. 14A of the POA empowers the police to proscribe ‘trespassory’ assemblies, protests held or impinging on private land. An order under s.14A can be used to extend civil liability into a criminal offence where trespass by protestors may be viewed as causing the serious disruption listed under s.12, or may cause damage to buildings or structures as illustrated by the ruling in DPP v Jones (Margaret) [1999] 2 AC 240, [1999] 2 WLR 625, HL.

However, it is in relation to police powers under the breach of the peace doctrine, that there exists considerable controversy and concern about an adequate balance being achieved. Some commentators argue that an over-reliance on this Common law principle, operated largely at the discretion or personal judgment of police officers in order to legally intervene at public protests, has undermined legitimate adherence to legislative provisions , where the scope and limits of police powers have been subject to democratic parliamentary scrutiny and debate before enactment.
While breach of the peace is not a crime, the ruling in R v Howell [1982] QB 416 at 426, [1981] 3 All ER 383 at 389, CA, per Watkins LJ provided the definitive set of circumstances that encapsulate the doctrine’s scope.
Breach of the peace gives rise to two consequences, police powers to arrest, or irrespective of arrest, the police can apply for the power to have an individual to be: ‘bound over to be of good behaviour and to keep the peace’ under the Justices of the Peace Act 1361 as amended by the Magistrates’ Court Act 1980 s.115.
The ECtHR ruling in Hashman and Harrup v United Kingdom (2000) 29 EHRR 241 examined the compatibility of ‘binding over orders’ with Article 5 right to liberty and Article 10.
In Beatty v Gillbanks (1882) 9 QB 308 members of a march could not be ‘bound over’ despite the potential of liability of attack by other parties, a ruling effectively reversed by Percy v Director of Public Prosecutions [1995] 3 All ER 124 which determined that lawful conduct could constitute breach of the peace if words spoken could provoke a real risk of provoking third party violence. Two recent contrasting rulings by the House of Lords demonstrate the courts sometimes divergent attitudes to police application of the doctrine.
In R (on the application of Laporte) v Chief Constable of Gloucestershire Constabulary [2006] UKHL 55, [2007] 2 All ER 529, the House considered the legality of a police decision to stop and search a coach full of protestors before it reached an air base, and order its direct uninterrupted return to London effectively detaining the protestors.
The decision was based on a police judgment that a breach of the peace would become imminent if the coach was allowed to continue to its destination as the police believed some of the protestors belonged to groups associated with causing civil disorder.
The Lords in Laporte examined the full scope of rights under Articles 5, 10 and 11 in relation to the ‘prescribed by law’ qualification and tested both the issue of ‘proportionality’ and the Conventions granting of a ‘margin of appreciation’ to individual States.
The Lords found that the claimant’s exercise of her Article 10(1) and 11(1) rights could not be restricted because of the potential conduct of other protestors, and the police intervention was found; not to be prescribed by law, disproportionate, not necessary in a democratic society, and that the breach of the peace doctrine must be confined to ‘actual violence’ and that this violence must be ‘about to happen’ .
In Austin v Metropolitan Police Commissioner [2009] UKHL 5, [2009] 3 All ER 455, the ruling was in complete contrast with regards the use of ‘ kettling’ by the police during mass demonstrations in Central London, an action undertaken to prevent an ‘imminent’ breach of the peace.

The ‘kettling’ tactic, which has been used subsequently involves the police forming a rigid cordon detaining protestors and passers-by for multiple hours, often in inclement weather without access to food, water or toilet facilities.
While there had been disorder, the claimant in Austin asked to be released but was refused on the grounds that some protestors were threatening a breach of the peace. The controversial ruling by the Lords in Austin held that ‘kettling’ can be justified under Article 5, lawful deprivation of liberty and at common law, where the police reasonably believe that confinement of protestors in one location without arrest is necessary to preserve the peace.
Laporte and Austin demonstrate that the Superior Courts rulings can vary considerably in terms of the judicial margin of appreciation granted to discretionary police Common law powers. Helen Fenwick commenting from one perspective has described the ruling in Austin as a ‘familiar tendency to defer heavily to police decision-making on the ground’ ,and that in Laporte: ‘Common law standards were subjected to the demands of proportionality and their application found wanting.’

It is clear that the issue is both political and objective.
In legislative terms, the Serious Organised Crime and Police Act 2005 has provoked much public debate, specifically Sections 132 to 138, which allow highly restrictive additional police powers in relation to regulating protests in the vicinity of Parliament which some critics view as failing to achieve the requisite balance.
Lord Hope in assessing the Article 5 implications of ‘kettling’ in Austin referred to the ECtHR ruling in N v United Kingdom (2008) 47 EHRR 39 in which the Strasbourg Court reaffirmed the fact that underpinning the entire Convention is a search for the optimum fair balance between the general interest of the community as a whole and the protection of fundamental individual rights.
As Elliot and Thomas highlight, the competing interests in relation to Articles 11 and 10 are more complex than between individual rights and the public interest, they are ‘multidimensional’ and include:
‘…the rights and interests of the protestors themselves, those of counter-protestors…those living and working nearby…and wider society…for example, the demands placed on the public purse by policing protests and the economic loss caused by the disruption occasioned by protests.’
When faced with these disparate factors, as stated in W201 Manual 2, p. 93, The police are ‘interfering with Convention rights whichever choice they make’.